This statement was read by Yuki Hoshi at the vigil held on March 26th, 2021 at Brookline High School 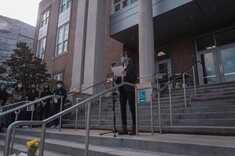 Yuki Hoshi, BHS 2022, courtesy of Aryn Lee, BHS class of 2021
I like to consider myself someone who is good with their words. There is something beautiful about self expression through a language that is a vital part of one’s culture--about being able to put your thoughts onto paper and sharing them with the rest of the world. So you can imagine how I felt when I was asked to speak today and suddenly no words were coming to mind. Everything left was muddled in my emotions--pain, grief, anger, and fear.

At some point after mainstream media failed to report on this crisis of hatred for so long, I managed to convince myself that I was being paranoid, and that I was overanalyzing the severity of the situation. Any fear that I felt I pushed aside in favor of what I believed was for the sake of retaining my sanity. Like many others, I became numb to the constant headlines of attacks, harassment, and hatred.
​
Last Tuesday’s events were a turning point for me. It was the culmination of more than just racism; it was misogyny, sexualization, socioeconomic class, minimization and demonization of foreign cultures, mental health, gun violence--I could go on and on. These are not abstract concepts.

When I received the email from Mr. Meyer last week in response to the shootings, I broke. The tears came and they wouldn’t stop. It’s real, I told myself. It’s real, it’s happening. It’s not just in my head. I was flooded with an overwhelming mixture of pent up fear. The AAPI community has been fighting to have our voices heard for over a year now. We all saw this coming. However, throughout all this sadness and anger, I also felt relieved that people were finally listening.

To the allies that are present here with us, I offer you this. Learn to pronounce our names correctly. Learn to understand our cultures beyond what Western media portrays it as. Learn our histories in both this country and beyond. Learn to recognize when someone is being racist and learn to call them out on it. It should not have taken the loss of 8 people’s lives for the world to listen.

It’s jarring to go from being silenced to suddenly being thrust into the spotlight. I feel violated and vulnerable. I wish I could tell you that I am stronger than the forces that work against us. I wish I could stand here in front of you and leave you with something powerful. I wish I could tell you that things are going to be better. As an upperclassman I feel a responsibility to assure the underclassmen that things will be alright; however, it tears me apart to admit that I do not know. I really do not know. But seeing us gathered here today, Asian Americans and allies alike, I want to say I have hope.