This statement was read by Stephanie Fan at the vigil held on March 26th, 2021 at Brookline High School 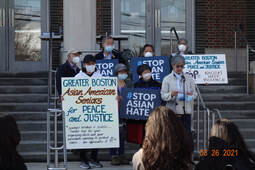 We are the children of the 1950s, coming of age in the midst of the Vietnam War in the 1960s and 1970s.  We advocated against that war in Asia, a war that was waged with unnecessary force and chemicals - not just against military forces, but against civilians as well.  It was an immoral war and and it was a war that also had repercussions for Americans of Asian ancestry here in the US.  Returning vets from Vietnam had two reactions upon encountering Asian Americans in public: “There’s a gook!  Let’s kill him.”  Or, to women, “Let’s go out for a drink and more.”

Now, we are senior citizens and it’s deja vu.  Again, we are seeing a war waged against Americans of Asian ancestry in our own country, people using hateful language, bullying, using force, using lethal weapons, much of it directed at women, at the elderly. And we are scared.  We feel that there is a target on our backs. And this must stop.

I know that most of you who are here are here to support the Asian American community and we thank you for that.  Now we need you to call out those who voice the hate or act on the hate.  Help find and identify perpetrators so they can be charged and brought to justice.  A common slogan in the 60s and 70s was: “if you are not part of the solution, you are part of the problem.”  That still applies.  Be part of the solution.  Please.  And practice respect for one another.  Peace.

To our younger brothers and sisters, we seniors thank you for your organizing efforts and your passionate advocacy to protect us elders.  It is greatly appreciated. Thank you.